Analysis onto the Evolving Cyber-Attack Trends During COVID-19 Pandemic 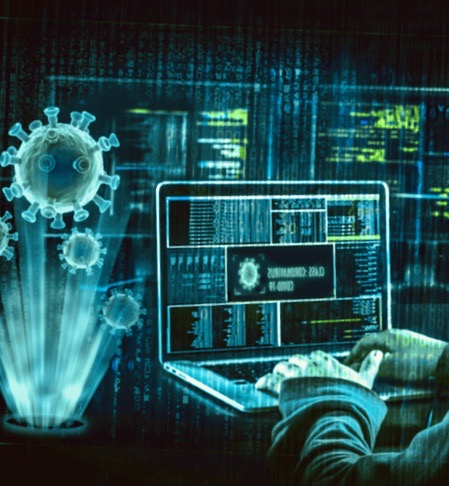 Today`s world has been changed because of the Corona outbreak. And everything become changed at a greater extent of the bad sides, where many people started to act like in inhuman ways. This situation has led to public outcry where many people lost their lives, many have been hospitalized and many are suffering from deadly disease where their family and friends worrying all the day. This situation was taken by the hackers to take advantage of them by cyber attacking individuals and especially organizations and this was seen a fivefold increase than normal during the COVID-19 time(WHO,2020). This could be compared to how people robbed from people affected, lost their lives and even raped women in such times during Tsunami 2004 December 24th in Sri Lanka. These crucial activities are totally unacceptable and intolerable. The actual reason behind this is often you'll never win and make a safer, good society by having an race with the unlawful residents, thieves. This act can be removed by educating the good values to the people. And shaping a society which would lead to good and safer society.

These unacceptable and intolerable issues has been increased in this pandemic. And the result is of a undisciplined society which resulted in cyber-attacks, cybercrimes, cyber bullying took place during this COVID-19 pandemic which is a great disaster because even healthcare organizations were victims of those attacks, which itself explains the importance and significance of this issue to be studied. The increase in such cyber-attacks which was nearly fivefold during these COVID-19 pandemic (WHO,2020) of nearly five months is the topic of study of the current issue in question.

The below figure explains the internet search trends by analyzing the keywords, while explanation provided below the image.

The internet user`s trend and interests were analysed where it had been seen that there's an enormous spike in program searches and website visits associated with corona virus information later a part of February and followed with an enormous spike afterwards in March and thereon.

Searching of face masks had a huge spike in middle of February , while it is worth nothing the searches for face masks were increased weeks before searches regarding corona virus information increase.

In this Corona Pandemic, there was several financial implications because there was additional cyber security spending and financial losses during this pandemic due to increased cyber threats. More than 70% of the organizations seen to have increased cyber security spending shows the prevalence of the issue and explains the additional financial stress placed no companies, even at such difficult times.

Cyber Vulnerability is where the security layer of the organization is reduced either by reduced security measures, or not present which leads to loop holes which could be exploited by the hacker to realize advantage, access into the system. It is worth nothing that even during the pandemic there is no reason for increased cyber security vulnerability in the organizations because the existing security protocols and policies are in force leading to security , so additional vulnerability due to pandemic cannot be present in the infrastructure but the anxiety of corona virus could lead us to employees clicking on suspicious related to corona virus could be possible.

Of all the different types of cyber-attacks, cyber-security experts consider brute-force attack to be an infallible but time consuming approach.

Credential stuffing is when the attacker used stolen credentials to realize unauthorized access to a user`s account. With automation, the process gets simpler. Huge databases containing comprised credentials are used to break into an account. Once the attacker is successful, the hacked account are often wont to initiate fraudulent transactions, for completing other ill-intended activities, to change or misuse the stored data.

The stolen credentials allow the attackers to access other platforms using an equivalent credentials. Generally people reuse their passwords for various applications, which give an whip hand to the attackers.

Phishing is one of the most prevalent types of cyber-attacks. The practice of sending emails from a trusted-seeming source to realize personal information is named phishing. The attacker uses not only technical knowledge but also social engineering skills to tug off a phishing campaign. These phishing emails usually accompany an attached file or illegitimate website that tricks you into downloading malware or revealing personal information.

On the opposite hand, spear phishing may be a targeted attack where the attacker conducts research on the victims before sending a customized message or email. This attack may be a sophisticated way of targeting victims. This type of attack isn't easy to spot , which makes its prevention difficult.

Malware is a form of virus which attacks the computer system by penetrating into the system and performing unpleasant, unrequired activities using the computing resources of the victims system.

Wide spread communications globally are taken advantage by the criminals of the cyber world to mask their activities. This includes hacking or DDos-ing an entire computer network, which requires huge resources, so by using computing resources present in victims computers. Using all the hacked computers and directing them to damage a network is possible because of huge resources available from hacked computers. Finally, this is a masking process, still the user is vulnerable and also could be confronted by the authorities for making cyber-attacks, which they are actually not aware of.

Factors such as financial implications, prevalence of increased cyber risks and analysis of corona virus related search results were also presented in this paper.

These types of cyber- attacks are prevalent and rampant in today`s world in this pandemic. They indicate an urgency for staying aware of these attacks and the ways to defend your systems against their malicious intent.

In conclusion it is therefore that during the COVID-19 pandemic significant increase in cyber-attacks were monitored. The main target and reason of the hackers using this opportunity is to maximize the impact by attacking during such tough times.

It is also noted that increased online usage, which was actually made mandatory due to lockdown also have caused increased cyber security risks among the users. It is also seen that hackers and cyber criminals used this new change as an avenue in order to exploit and take advantage by victimizing and attacking the users, who are sometimes relatively new who are more vulnerable to such attacks

We will continue to update CITS; if you have any questions or suggestions, please contact us!

Trusted by the world's best teams

Let's create something great together.

Note! When you visit or interact with our sites, services or tools, we or our authorised service providers may use cookies for storing information to help provide you with a better, faster and safer experience.